Should we consider this site a park on the Ohio River? Certainly it is on the Ohio River, and on the water far more than most parks, for it is a working museum ship. It’s also open to the public: run by the volunteers of a nonprofit organization, it has the modest family admission fee (two adults and all minor children) of $20. (Compare Disneyland: $477 for two adults and three children aged 3 to 9.) But is it a park? The OED defines “park” as “a large public green area in a town, used for recreation,” “a large area of land kept in its natural state for public recreational use,” “a broad, flat, mostly open area in a mountainous region”  This site is not large, not green, not natural, and not in a mountainous region. Many of the other parks listed here also do not meet that description. However, it is in a town, it is used for recreation, and it does give us information about the Ohio River. Besides, it’s fascinating! (The research team spent a lot of time there.) So, we will consider it a park!

There are many museum ships around the world; this one is the select category of those that have been refurbished so that they can sail from one place to another. (As indeed, LST 325 does: it appears in some of the research team’s photographs from 2013 of Riverfront Park in Marietta, Ohio.) It’s a worldwide network, connected at least by the annual Museum Ships Weekend Event, where Amateur Radio operators  on board ship contact as many other ships as possible. It also participates in a fascinating local event, one that takes place annually on the riverfront beach at Evansville, on the last weekend in June: a reenactment of the World War Two invasion of Sicily. Reenactors as Germans, as well as Americans.

The relationship of this LST (Landing Ship Tank) to the Ohio River is less clear: it was a ship that conveyed troops and tanks (up to 10!) onto shallow beaches in the distant waters of World War Two and Vietnam. But it is unusual in being a very shallow draft boat: only three feet of water beneath its hull. They were ballasted with water in order to given them enough stability to make their way across the Atlantic. And, because they were shallow draft, when, in World War Two, the deep draft shipbuilding yards on the east and west coasts of the United States were tasked with the building of battleships, these boats could be built on a shallow river: the Ohio. Building them here in Evansville, and in other ports along the Ohio, reinvigorated shipbuilding ports that had been defunct since the end of the age of the steamboat.

Thank you to Evansville, which has made the docking of this obscure but fascinating piece of Ohio River history possible, and to Bob, who gave the research team an extensive, detailed, and informative tour. The research team is so glad that we get to see this kind of industrial archaeology! And note: the restaurant next to the LST 325 uses the complete set of the US Army Corps of Engineers Ohio River Navigation Charts, from Pittsburgh through Marietta, Huntington/Ashland and Portsmouth, to Cincinnati, Louisville, Evansville and Cairo, Illinois  as the surface for its bar.

Looking out the front to the river 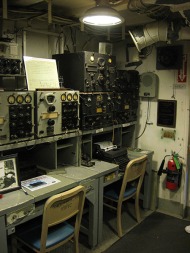 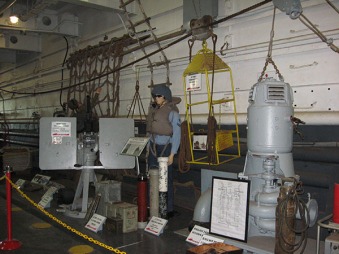