“Wildlife first, people second” is the unofficial motto of the U.S. Fish and Wildlife Service, the department in the US Department of the Interior that runs the National Wildlife Refuges. That is an admirable goal. Yet, care for wildlife, while an admirable objective, also requires that PEOPLE care — which requires what is called in the profession, “interpretation,” “the action of explaining the meaning of something.” In this aspect, I feel that the Middle Island National Wildlife Refuge fails in its mission. Fails, because it denies people access.

Middle Island is one of 22 islands in the Ohio River which have been protected as the Ohio River Islands National Wildlife Refuge. Its principal objects of protection are bird flyways and native mussel beds. The refuge has an excellent Visitor’s Center at Williamstown, West Virginia, opposite Marietta, Ohio. All of the other islands are inaccessible, except to those who have boats (as many local people do.) So, on the one hand, there is a Visitor’s Center; on the other, islands that are not accessible. What about those of us in the middle —who would like more unmediated access to wildlife than the Visitor’s Center provides, yet who come from a distance and do not have boats? Middle Island National Wildlife Refuge ought to be the perfect place for us. But it is not! Yes, you can drive onto the island (via a frightening mid-19th century bridge). Once there, what can you do? Nothing! Well, a bit more than nothing — you can drive the gravel road auto tour on the north side of the island, punctuated with useful placards about its natural features. But the drive itself is completely boring: there is nothing to see except the wild shrubs and trees, and a maintenance building and parking lot in the middle.

I was going to give this park a zero until I discovered the fishing access, a concreted riprap bank, which is quite useful and charming (it, rather than the auto tour, is the subject of the videos.)

What’s the problem? The problem is that there is too little opportunity for people to engage with this wild place. What would I do? I’d add a picnic shelter and a primitive campground. “But this interferes with the wildlife,” you object. Yes, it does a bit — but I would cluster everything — not only the picnic shelter and the primitive campground, but also the fishing access and the existing pit toilet and maintenance building — all at the downstream end of the island. I’d eliminate the auto tour, and put the placards there as well. That way, not only could more people access the island for more uses, but the wildlife would have a larger patch unbroken by human intrusion. To build support for wildlife, people have to have opportunity to engage with the wildness of nature. A manicured path is one way; camping overnight in a primitive campground is another. 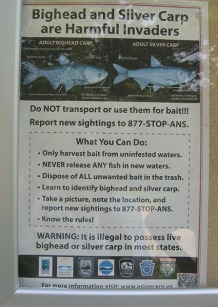 Let’s go fishing! The river and park videos are views of the fishing area. 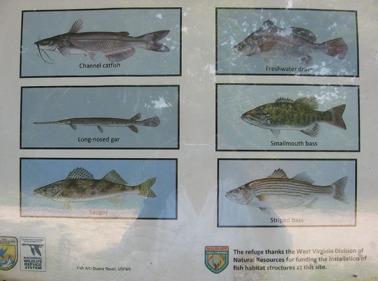 the fish that can be caught. 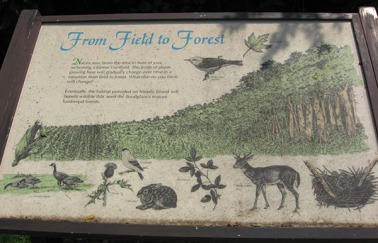