The banner on the disused early 20th century elementary school announces that this is Bethlehem’s 203rd year of existence. There is no doubt about that: there is lots of evidence. The streets, in a grid, are named First, Second and Third, crossed by Main Street. There is a distinguished early brick home on the point and a couple of double pen houses characteristic of the mid-1800’s (citation). A late 19th century storefront is now used by an Etsy business. More promisingly, unlike many such tiny towns along the Ohio, there are several substantial newer houses, most along the bluff just above the river. They give it an air of cheerfulness. The number of private docks extending out into the Ohio speak of prosperity. Nonetheless, this is a very small place: 100 inhabitants? 50?

The boat launch is just that: a steep narrow path down to the river. A concrete pad. Just enough space to turn a truck and boat trailer around. The numerous “No Parking” signs attest to that. Bicyclists or kayakers could find this a refreshing place to camp — there is a small plot of mowed grass on the hill just above the boat launch. But they probably should ask permission before they do. And there are no services at all.

Bicyclists arriving here should check the riverfront road from Hanover shown on the map. When the research team passed through here in summer 2016 that road changed gradually from paved to well graveled to poorly graveled to mud and then apparently vanished into a creek. There are many beautiful country roads to ride on the top of the bluff. Immediately on leaving town there is an enormous sand quarry, a rural industry whose environmental effects have recently received attention. Those Archaic looking hills are manmade in this century. Along the way one can see a distinguished abandoned place: the Marble Hill Nuclear Power Plant, proposed in 1973 and abandoned in 1984 after $2.7 billion had been spent. 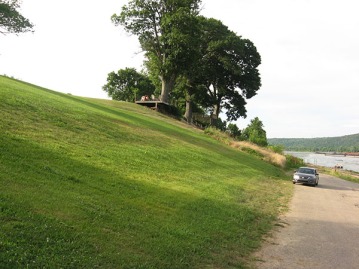 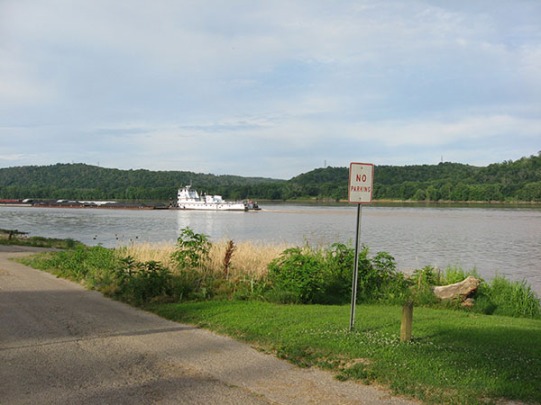