A gaggle of junior high boys gather at a plaza after zooming down the park on their bikes. Two people, not young, and not thin, are taking a nap under a tree. A man playing Frisbee golf with his partner tells the research team that the dog he was calling is invisible, gone after groundhogs “There are so many in this hill here!” It’s not clear what this park is heritage of, but a disused rail line runs though it and a couple of stone foundations abut the tracks. Given the gravelly quality of the soil and the poor quality of the grass growing here it must have been a 19th century industrial area along the river, its buildings lost to disuse and floods. A signboard and Purple Martin houses memorialize a man who loved this park and running in this park.

The woman who directs the research team to the Episcopal church later resolves the mystery: it is a former rail line, turned into a public amenity by a group that worked very hard to do so. Its website contains an interesting practical history of how such a thing is constructed: from the idea in 1995 it takes about 7 years to get the first section built. Funding for the second section appears when the state Department of Transportation pressures the city to make use of transportation funds allocated six years earlier. The names of architects and landscape architects who do a lot of this kind of work in Indiana appear here as well. The bike route itself uses a different railbed, but from one vantage point on it one can see the Madison Railroad Incline Cut. This famous piece of civil engineering was intended to connect Madison, a prosperous port on the Ohio River, with the rail lines on the top of the bluff which were beginning to substitute for water transportation. It wasn’t successful. The result was an economic disaster for 19th century Madison, which lost its major source of economic activity. In the 21st century, this loss has become a benefit, for tourists from all over the Midwest come to see this large and almost untouched 19th century town. 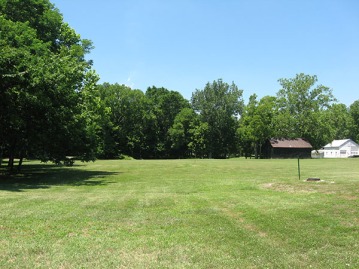 rv summer village across the river 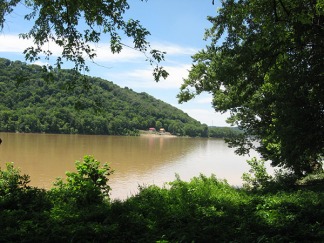