Two of the mainstays of this town, Raymond and Mary Jean Cassidy, died tragically in a house fire in 1999. They ran the General Store, and Mary Jean the post office, for many years. Their portrait is posted in the picnic shelter in the park. There is a touching reminiscence of them online at the Community Foundation of Perry County website. A town as small as this depends on generosity of people such as these.

But what kind of town is Magnet? Hardly a town at all: a “populated place” in the terminology of the USGS Geographic Names Information System.

Census Bureau terminology. Wikipedia offers interesting, but ultimately unsatisfying information about the town of Magnet, as follows: “When pioneers started to settle the banks of the Ohio River, one of the first in the Magnet area was Dodson, who operated a wood yard. The settlement was known as Dodson Landing. When Dodson left, Jesse Martin took over the wood yard operation; therefore the area was referred to as Martin Landing. In 1848 the residents had to decide on a name for the village. To honor Jesse Martin they chose the name Rono, the name of Martin’s dog. The settlement was known as Rono until 1899 when the United States Postal Department changed the name to Magnet. The Magnet post office closed in 1992.” Much of it comes from James de la Hunt’s 1916 Perry County: A History, which also reports that “In the extreme eastern portion of Perry County no town plat has ever been regularly laid out and recorded, but in very early times the home of an old settler on the river bank, some few miles below the Crawford County line, came to be known as Dodson’s Landing …” After being called Dodson Landing, Martin Landing, and Rono, no one answers the remaining question of why the Post Office, in 1899, replaced Rono with Magnet. And, is “Rono” a real name for a dog?

It would be pleasant to camp here on the grass lawn and use the picnic tables, grills and picnic shelter, whether you came by bike or paddling. However, there are no amenities. The adjacent restaurant/bar was open on a September Tuesday afternoon, so it may be open often. 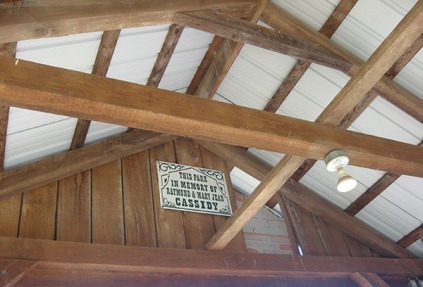 this park in memory of 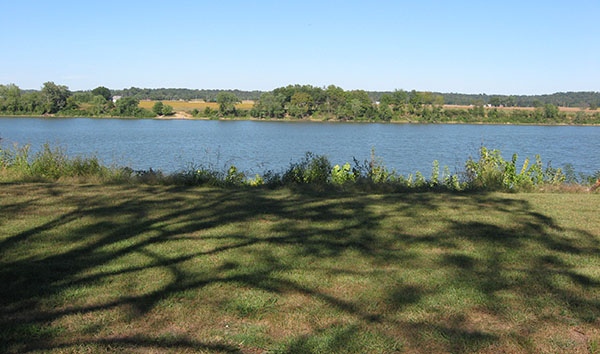