By the rules the research team uses, Angel Mounds State Historic Site should not count as a park on the Ohio River, because the site does not extend down to the Ohio River. Yet the mounds exist because the First Peoples who built them located them on the bluff above the first terrace of the river, between a slough and the chute north of Three Mile Island, in order to use the river resources. It is one of the most intensely analyzed of the Mississippian archaeological sites. This is frustrating!

Apparently the Ashumbala State Nature Preserve, established in 1986, named using the Choctaw word for Cottonwood tree (Byington, Swanto and Halbert 1915), and known for its Ohio River Floodplain Forest and private land separate the site from the Ohio. The boundary with the state of Kentucky is in the chute. Better interpretation would open at least a visual pathway to the river and make it possible to see the mounds in the context of their riparian landscape. Putting a destination point on the riverbank also would lend coherence to a site that seems, to the visiting walker, an uncharted expanse of grass with occasional interpretive objects spotted about it. It could include an explanation of the riparian resources the Mississippians used and how they used them (fish, mussels, plants, cane, etc.,) building on the explanation in the museum. Perhaps it also could explain that the corn-beans-squash triumvirate was a new food strategy by these Late Woodland and Mississippian peoples, replacing the different set of foods that constituted the Eastern Agricultural Complex cultivated by their forbearers.  Given that, the site is well-used for recreation: a high school track team was practicing there when the research team visited.

Speaking of interpretation, how is a site like this to be interpreted? The difficulty is that the First Peoples who built it left no descendants. Unlike the ancestral Puebloans, whose descendants are the Pueblo Indians of the Southwest, the historic Native American tribes who are mentioned as being in this area migrated to here or were displaced from elsewhere: the Miami and Potawatomi from Wisconsin, the Delaware and Wyandotte from homelands to the north and east, and the Shawnee, Piankashaw, and Kickapoo from elsewhere east of the Mississippi. They all moved into land whose earlier inhabitants vanished for environmental or political reasons not now known to us. Hence, inviting “local Native Americans” to demonstrate their crafts is historical mis-interpretation of this site. It also runs into the legal problem of which tribes count as national entities on the Federal or State level. Indiana has one federally recognized tribe, the Pokagon Band of Potawatomi Indians, and none on a state register. A good way to proceed would be to invite people to identify and explore their Indian ancestry, and to celebrate it, much as they use census and local records to explore their Irish or Italian or Japanese ancestry. Irish or Italian or Japanese ancestry gives one no rights of citizenship in Ireland or Italy or Japan, but it gives people personal connections to the past that otherwise would go unrecognized.

Tribal ancestry and tribal citizenship are different concepts, but each has a role to play. The important thing is that these attachments be tribal: connected to a specific place, time, and material and spiritual culture. Doing so also would make it possible to substitute the real activities and material culture of Eastern Woodland Indians for the stereotype that Native Americans wear headdresses and live in teepees. The well-received exhibit Artists of Earth and Sky, curated by the Nelson-Atkins Museum and the Musee du Quai Branly introduces audiences most familiar with the material culture of the Southwest to work by a different set of First Peoples. This site could do the same, and thereby promote the work of contemporary Woodland Indian artists.

In addition to an informative museum, Angel Mounds Historic Site — like many similar historic sites — has an excellent bookshop that, in addition to offering books and toys for children, crafts, and books about nature, brings together all the research publications relevant to the site. This is one of the great contributions of such gift shops. There is ample room for bicyclists to set up a tent. Kayakers would have difficulty bringing their boats from the river. Whether the Indiana State Museum, which manages the site, would approve is not known.

interpretive center in shape of mounds 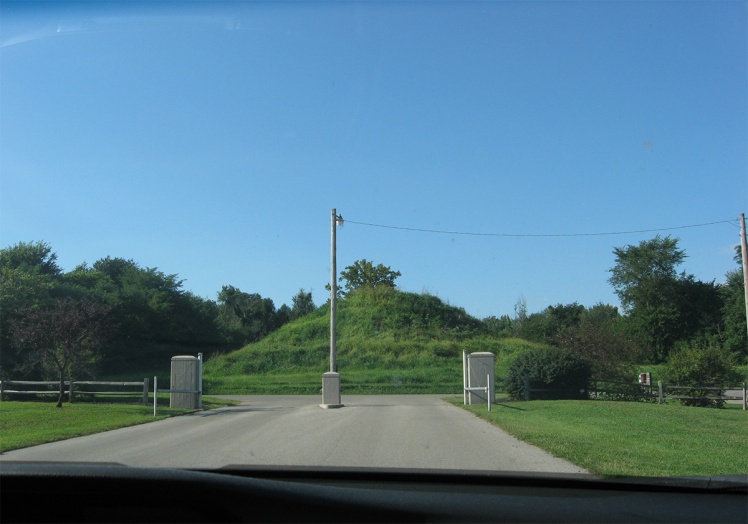 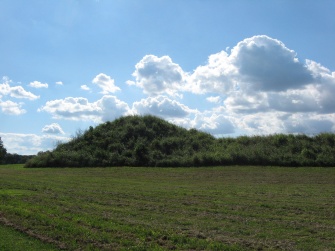