This is a classical inside the levee park. On the left, the river and a low bluff, on the right, a narrow plain and then the constructed hill of the levee. A path on top, the other side of the hill, then the town. It makes a wonderful linear park. Originally the Jaycees River Front Park, this is now much updated with a modern playground, an amphitheater, and ample trails for walking, jogging, and bicycling. The Ohio River Greenway Development Commission illustrates it with an aerial photo.

This portion of the Ohio River Greenway in New Albany is the furthest downriver segment of an ambitious seven mile riverfront park system that links three cities: Jeffersonville, Clarksville, and New Albany — across two Indiana counties, Clark and Floyd. Via the Big Four Bridge in Jeffersonville and the K&I Bridge in New Albany it links to Louisville on the other side of the Ohio River. That creates a loop trail, where people on one side of the river have good access to the amenities on the other side. The Greenway has taken a long time to build, but it is supported by an active Friends of the Ohio River Greenway group. Two studies from 2014 and 2015 demonstrate that the greenway spurs economic development, attracting tourists from other areas and people who spend money there, especially on food.

The park offers a good view of the Sherman Minton Bridge. The research team typically uses original citations in preference to the summaries on Wikipedia, but in this case Wikipedia includes a detailed article about why it was constructed, its relationship to historic trails (it replaced a ferry) and its prominence in engineering history. One of the historic markers explains the award the bridge won in 1961.

This project should be a model for other riverside communities of how to create an amenity that will contribute to the advancement of all. Although there are many places along the waterfront where an intrepid bicyclist or paddle could camp unobtrusively, (and there is no water or toilet, the potential facilities being closed the day the research team visited), it certainly would be nice if the project included designated spots to do so! This would be an excellent place for a bicycling or paddling rally! 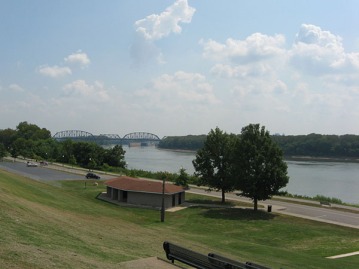